There are lots of new features and improvement launched by Microsoft in SQL Server 2016. There are two small but really interesting things for the T-SQL Developers, DBA Developers who are involve in writing T-SQL code.

Situation: Let’s think about a situation where we are creating a new object (for example –  Stored Procedure) on Development server. I am creating it for the first time so I have written the code with Create Stored Procedure  syntax and it worked fine. Now I want to make some modifications to this code then I have written the code with Alter Stored Procedure syntax and again it worked fine. Now after successful development this code will go to the next level of servers like QA Server. Latest code will be taken from the repository i.e. Alter Stored Procedure syntax. We don’t have this object in QA environment so alter statement will be failed. To overcome from such situation generally we write the code like:

If the object already exists then it will be dropped with the execution of two line of code. In SQL Server 2016, this task can be written in a single line and it will also minimize the number of line in your code as:

Here, you can see that we are using single line code to drop the procedure and in next line we are creating the object to achieve the altering of this object. Now In SQL Server 2016, I can achieve the same using the single line of code as shown below:

Now, we can achieve the same thing without writing the drop object statement. You can see the same logic has been implemented using a single line of code. Isn’t it really interesting?

SARGability and Selectivity in SQL Server

Prince Rastogi is working as Database Administrator at Elephant Insurance, Richmond. He is having more than 8 years of experience and worked in ERP Domain, Wealth Management Domain. Currently he is working in Insurance domain. In the starting of his career he was working on SQL Server, Internet Information Server and Visual Source Safe. He is post graduate in Computer Science. Prince is ITIL certified professional. Prince likes to explore technical things for Database World and Writing Blogs. He is Technical Editor and Blogger at SQLServerGeeks.com. He is a regular speaker at DataPlatformDay events in Delhi NCR. He has also presented some in depth sessions about SQL Server in SQL Server Conferences in Bangalore.

View all posts by Prince Rastogi → 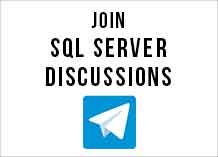